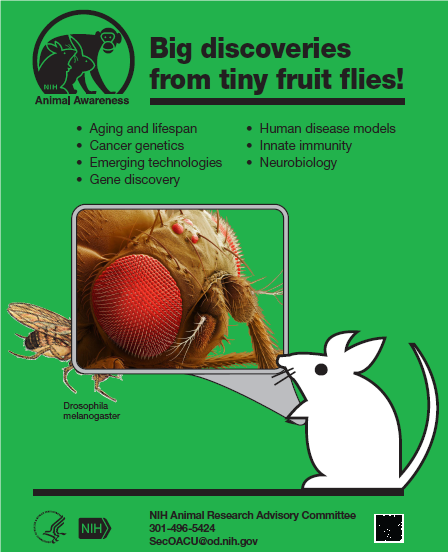 Throughout the history of neuroscience, investigators have relied on model systems to uncover basic principles of neural function. By necessity, our understanding of the human nervous system has been built in large part from the understanding of biological mechanisms studied in a diverse set of animal models. Pioneering researchers, Nobel Laureates among them, have identified fundamental mechanisms of brain function by studying, for example, giant axons in the squid, neuromuscular junctions in frogs, neural networks in worms, or the visual system in non-human primates. In the past decade, the explosion of genetic tools available for use in animal models has revolutionized neuroscience. For instance, our understanding of how genes determine the anatomy, physiology, and connectivity of neuronal systems is so advanced in more simple organisms, like worms (Caenorhabditis elegans) and fruit flies (Drosophila melanogaster), that it is now within our reach to fully catalogue the mechanisms and pathways by which the brain controls their behavior.

In addition to helping uncover fundamental principles of how the brain works, genetic manipulations in model species provide important insights into the basic processes that are disrupted in a large variety of human neurological disorders. Though these animal models are far from replicates of the human condition, they are effective tools in studying how specific disease-causing abnormalities exert their devastating effect, and how potential therapies might help correct them. A full understanding of higher order human nervous system function and the neurobiology of human disease cannot be attained without careful studies in vertebrate models, including non-human primates. However, probing basic neuroscience questions in simpler invertebrate model systems provides an important complement to studies in higher organisms, and helps lay important groundwork for disease-targeting science.

With funding support from NINDS, investigators conducting research with invertebrate animal models have discovered novel mechanisms underlying neural functions – work that would not have been possible without those model systems. In 2002 neuroscientists Sydney Brenner and Bob Horvitz received the Nobel Prize for their discoveries in C. elegans, and studies using the invertebrate nervous system continue to shed light on important principles of neuronal function. Here we highlight two examples in which experiments in simple model systems reveal the molecular physics behind the sense of touch, and identify an instance of single-neuron control of a brain circuit that governs the complex body mechanics of directional turning during flight. 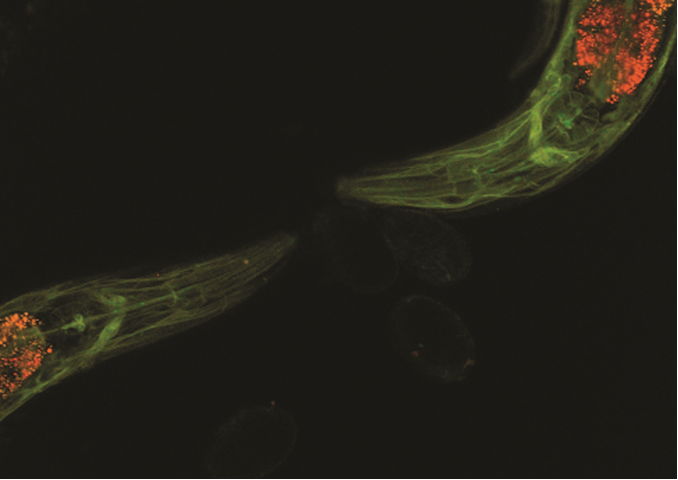 The microscopic nematode worm C. elegans has special receptor neurons that respond to gentle touch. A study of these neurons, published in Nature Cell Biology by Dr. Miriam Goodman and colleagues at Stanford University, showed how C. elegans touch cells flex and bend as a worm crawls and turns. By genetically modifying a cellular cytoskeletal element called beta-spectrin (see figure 1), Dr. Goodman showed that the touch neurons in spectrin-defective worms kink and buckle abnormally on the shortened side of the worm’s body as it bends into a curve. The experiments revealed that in the unbent body configuration, spectrin molecules themselves are slightly stretched. As the worm body bends, normal spectrin molecules shorten and relax their constitutive tension, without buckling, much like a stretched rubber band (see figure 2 – wild type).

However, when spectrin is defective (see figure 2 – unc-70(e524)) the constitutive tension is absent. Thus, when the spectrin ‘rubber band’ shortens during a bend, it kinks and buckles abnormally, as would a relaxed rubber band that is being scrunched. Using a highly sensitive fluorescent protein (derived from spider silk) that registers tiny changes in molecular stress, the researchers elegantly verified this molecular stretch hypothesis in live and behaving animals. Thus, the normal spectrin configuration in touch cells acts like a molecular tension-loaded spring that can accommodate both lengthening and shortening as the body bends away from, or towards, the touch neuron’s side of the body. Since spectrin is part of the cytoskeletal machinery of vertebrate neurons, including those of humans, we might presume the same mechanisms to be important for our own sense of touch. 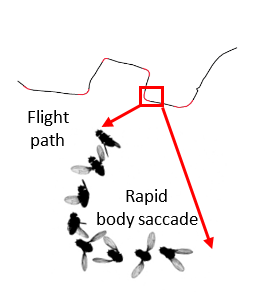 The second example focuses on directional control during flight. Compared to humans, Drosophila have very small nervous systems. Still, flies accomplish complex behavioral responses in reaction to their environments that far exceed, for example, the masterful algorithms employed for automated robots. Whereas a robotic floor sweeper navigates clumsily at a cost of a few watts per second of power, a fly can navigate skillfully (see figure 3, unpublished data) at speeds over 5 meters per second with a nervous system of only a few hundred thousand neurons, in a brain slightly larger than a grain of salt. Dr. Michael Dickinson and colleagues at CalTech University have used genetic engineering to identify, label, record, and manipulate a single neuron in the fly brain that may control spontaneous, sharp turns in flight. The relevant neuron extends from the fly’s brain into the ventral nerve cord  (see figure 4, unpublished data), the corollary of the human spinal cord. In a virtual environment (see figure 5, unpublished data), the researchers can record the electrical membrane potential – that is, the neuron’s pattern of activity – during tethered flight. 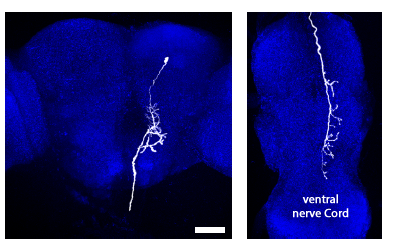 4. Through screening, a descending interneuron has been identified that controls these behaviors. Image courtesy of Dr. Michael Dickinson.

The researchers show that simply activating the neuron alters the angles at which the wings are beating, at hundreds of beats per second, rapidly rotating the fly’s flight path in 3-D space. This suggests that the firing of this single neuron controls spontaneous actions.

The human nervous system has to accomplish a similar distribution of command signals to muscles and peripheral nerves in order to produce behavioral responses. 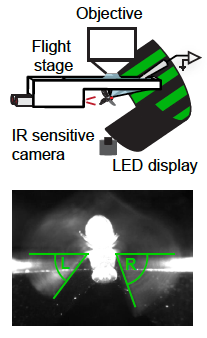 Understanding spontaneous and voluntary behaviors in the relatively simple fly nervous system allows us to hypothesize similar mechanisms in the human brain.

These are just a few examples of the exciting advances being made in neuroscience through the use of invertebrates. NINDS is committed to its mission of increasing fundamental knowledge about the brain and nervous system, and to use this knowledge to reduce the burden of neurological diseases. Model systems, like C. elegans and Drosophila, are important contributors to accomplishing this mission. For more information on this topic, read the associated Director’s Message from NINDS Director Dr. Walter Koroshetz.