NINDS is about to initiate a novel funding mechanism, called the R35, in which outstanding scientists will be supported for at least 50% effort by a single, renewable grant for as long as eight years. To ensure the investment is on track, an assessment of progress will be made during the fifth year of the grant.

As we described in a detailed post released with the Request for Applications (RFA), the purpose of this pilot is to allow outstanding investigators to obtain sustained and flexible support for their research programs. By reducing the time PIs spend writing and administering multiple grant awards, we aim to maximize the scientific impact of proven investigators by giving them the flexibility to take on longer range, innovative, high-risk research. The R35 will provide PIs with more time to engage in research directly, either at the bench or by closely supervising and training students and postdocs.

In response to this RFA, many superb applications were submitted by remarkable investigators. On May 26th, the NINDS Council reviewed and approved the funding plan.  These proposals were unique in that the proposed research program was described in broad strokes, with no specific aims or detailed experimental plan. The primary focus of the review was on the applicant’s track record of scientific contributions. Applicants were also asked to emphasize their record of professional service, mentoring, and to provide a budget commensurate with their recent levels of NINDS support.

NINDS convened three review panels to meet the challenge of assessing the impact of the applicants’ past research, their overall productivity, their innovation/creativity, and their record of performing rigorous research. Reviewers also evaluated whether the scope of research proposed was sufficiently comprehensive, ambitious, and/or creative to benefit substantially from the increased flexibility offered by the lengthened funding duration of the R35 mechanism.

With the R35, we intend to enhance research stability rather than increase the total amount of funding supporting a research lab. While applicants could request up to $750,000 in direct costs per year for a period of eight years, they were expected to request a budget justified by their current research program that reflected recent current total NINDS research funding. Invited to provide specific comments on requested budgets, reviewers noted any overlapping effort/funding, and verified that all requested funds were for research directly relevant to the NINDS mission. It is not surprising that many outstanding laboratories competing successfully for the R35 had sources of funding other than from NINDS or even NIH. Our policy was to allow these other funding streams – as long as the PI was able to commit at least 50% research effort to the RPA.

NINDS funded the R35 applications in score order and given the overall excellence of the applications, we raised the cap from $20 to $25 million for a total of 31 awards. The awardees represented many disciplines in basic neuroscience, at a variety of career stages, with demonstrated potential to devote their time and creativity to the pursuit of cutting edge science.  The applicants and awardees spanned the possible career stages (see Figure 1), bearing in mind the requirement that applicants have been continuously funded for at least the past five years though an R01 or R01-equivalent award from NINDS. The percentage of women proposed for awards (23%) equaled the percentage of women applicants.  Approximately 15% of the applications that were submitted will be funded, which is consistent with our current R01 payline (currently set at the 15th percentile).

Figure 1. Applicants and proposed awardees with respect to the decade in which they received their last degree (ie., MD, PhD).

We carefully considered a number of factors when determining R35 budgets.  We used the investigator’s most recent four-year NINDS funding average as a starting point, and then adjusted the budget based on reviewer comments, the PI’s career stage, and overall funding trajectory. Given that we require at least 50% research effort, yet hope to avoid locking investigators at an overly constricting budget level, we agreed that the minimum award should be $350,000 in direct costs. In particular, we wanted to allow room for earlier stage investigators to expand their research programs, often proposing budgets slightly higher than current NINDS funding for these investigators.  Some more senior investigators received award offers closer to their recent average funding levels, although this was often less than their budget request. See Figure 2. 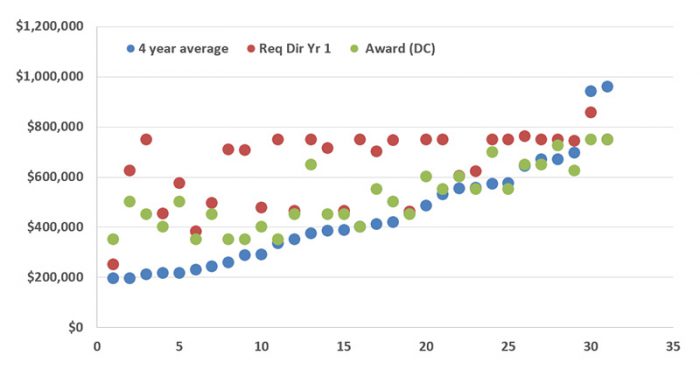 Figure 2. Data for each of the grants proposed for funding. Red dots indicate requested funding, blue dots the investigators 4 year average NINDS funding, the green dots indicate the award amount proposed by NINDS and affirmed by the National Advisory Council to NINDS.

An important part of the discussion with the NINDS Advisory Council revolved around the importance of ensuring this substantial investment remains on track through an assessment of progress during the fifth year of the award.  The two precedents discussed were the HHMI program and the NINDS intramural program. In the latter, intramural NINDS laboratories are evaluated every four years and, like the R35, the emphasis is on the scientific trajectory of the lab.  These assessments are binned into “outstanding”, “excellent”, “very good”, or less than very good.  Funding is generally held stable or increased for an “outstanding” review, stable for an “excellent” and decreased for “very good”; discontinuation for “less than very good”.   By comparison all of the R35 awardees clearly fall within the “outstanding” category and NINDS’s expectation is that all will continue at this high level.  However, a rigorous assessment in the fifth year is necessary to ensure that NINDS remains an effective steward of the taxpayer’s investment in neuroscience. The Council agreed to work with the NINDS staff to develop an assessment method for the review of these new awards.

The R35 award is designed to be the sole NINDS investigator-initiated grant.  Additional NINDS awards are limited to contributions to cooperative agreements for translational projects or clinical trials.  It is possible that an investigator may wish to drop from the R35 program; for instance to assume administrative positions or to submit other grants that decrease effort below 50%; or the investigator may wish to submit for greater NINDS funding.  In such cases NINDS will phase out the R35 award.  Though difficult to predict so far in advance, at this point NINDS is hopeful that the program will be successful and outstanding awardees will have the opportunity to submit renewals of their R35’s eight years from now.

The RPA is a pilot program.  If our budget allows, we plan to continue this experiment and accept another round of applications in 2017. NINDS will regularly use available metrics to compare the R35 mechanism to the more conventional R01.  NINDS is intent on budgeting to ensure a consistent level funding for investigator-initiated research and the R35 is an additional mechanism to achieve that goal.  NINDS hopes that the R35 will allow a subset of investigators to devote more of their time and creativity to advance our common mission to seek fundamental knowledge about the brain and nervous system, and to use that knowledge to reduce the burden of neurological disease. We welcome your input on this pilot program.

The R35 is yet another form of NINDS’s bedrock commitment to advance our mission to seek fundamental knowledge about the brain and nervous system and to use that knowledge to reduce the burden of neurological disease.