We’ve known for decades now about the “leaky” STEM (science, technology, engineering and mathematics) pipeline. Too few blacks and Hispanics, and too few women of all colors, stick with STEM courses as they progress through school and too few end up pursuing careers in the sciences. While a considerable body of research suggests that the STEM pipeline develops major holes by high school, a recent study indicates that disparities in STEM education may actually be traced back to before kindergarten

In an effort to reverse these worrying trends, the White House recently launched the inaugural National Week at the Labs (February 29 to March 4) in coordination with the White House Council on Women and Girls (CWG) and the My Brother’s Keeper (MBK) Task Force. Kicking off the week was an event at the White House meant to bring together scientists, engineers, and lab workers to inspire students with engaging experiments and STEM mentoring sessions. 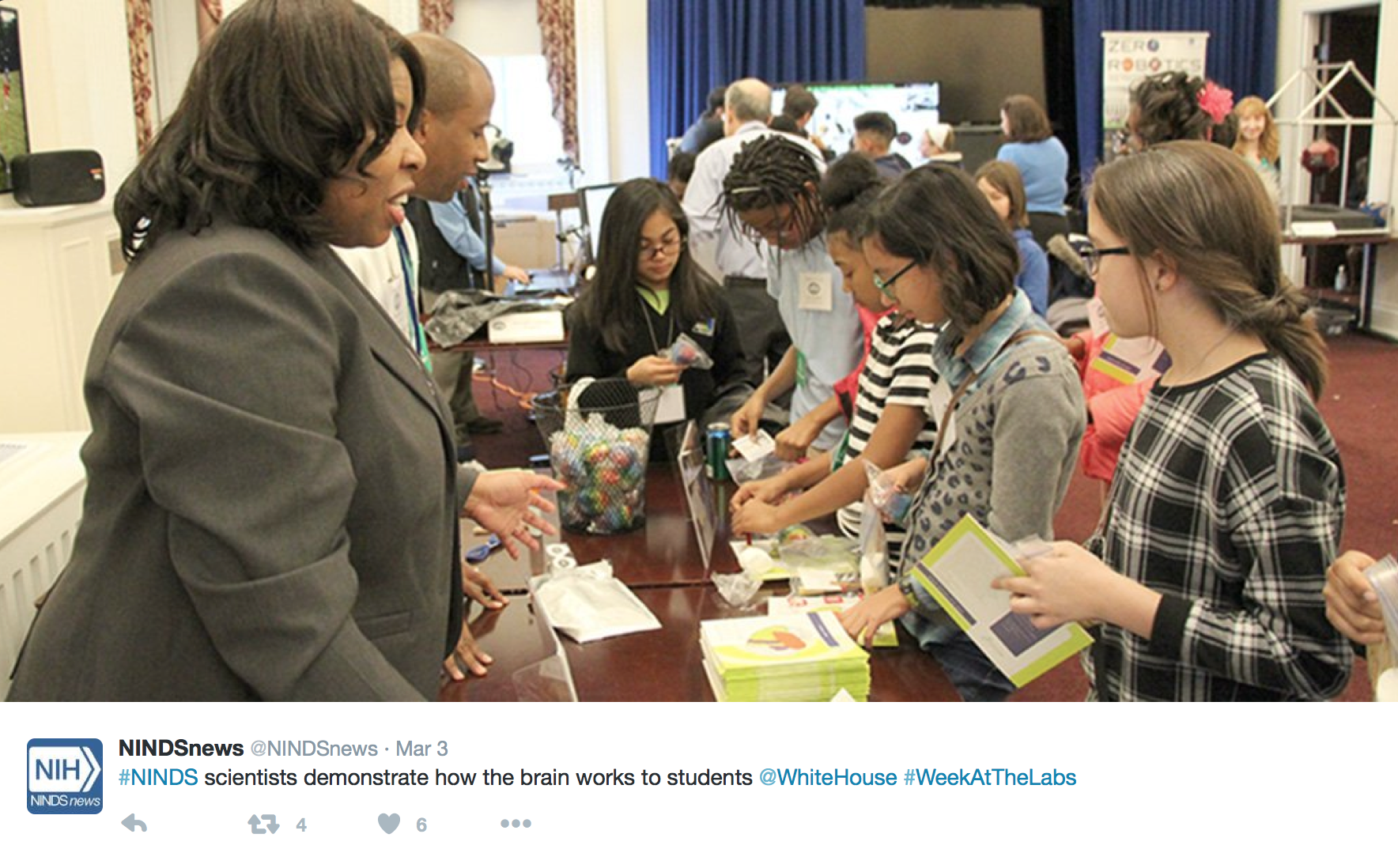 Representatives from NINDS, including Dr. Edjah Nduom, Neurosurgery Branch Staff Clinician, and Dr. Michelle Jones-London, Director of Diversity Training and Workforce Development, attended the event and had the pleasure of guiding eager kids through hands on demonstrations about how the brain works.

In addition to the event at the White House, throughout the week more than 50 federally funded labs and research institutes in more than 20 states opened their facilities to thousands of local students. Seeing this as a perfect opportunity to introduce NINDS’s research to a diverse set of students, we invited members of Girl Scout Troops from the DC and Maryland area to visit the John Edward Porter Neuroscience Research Center. 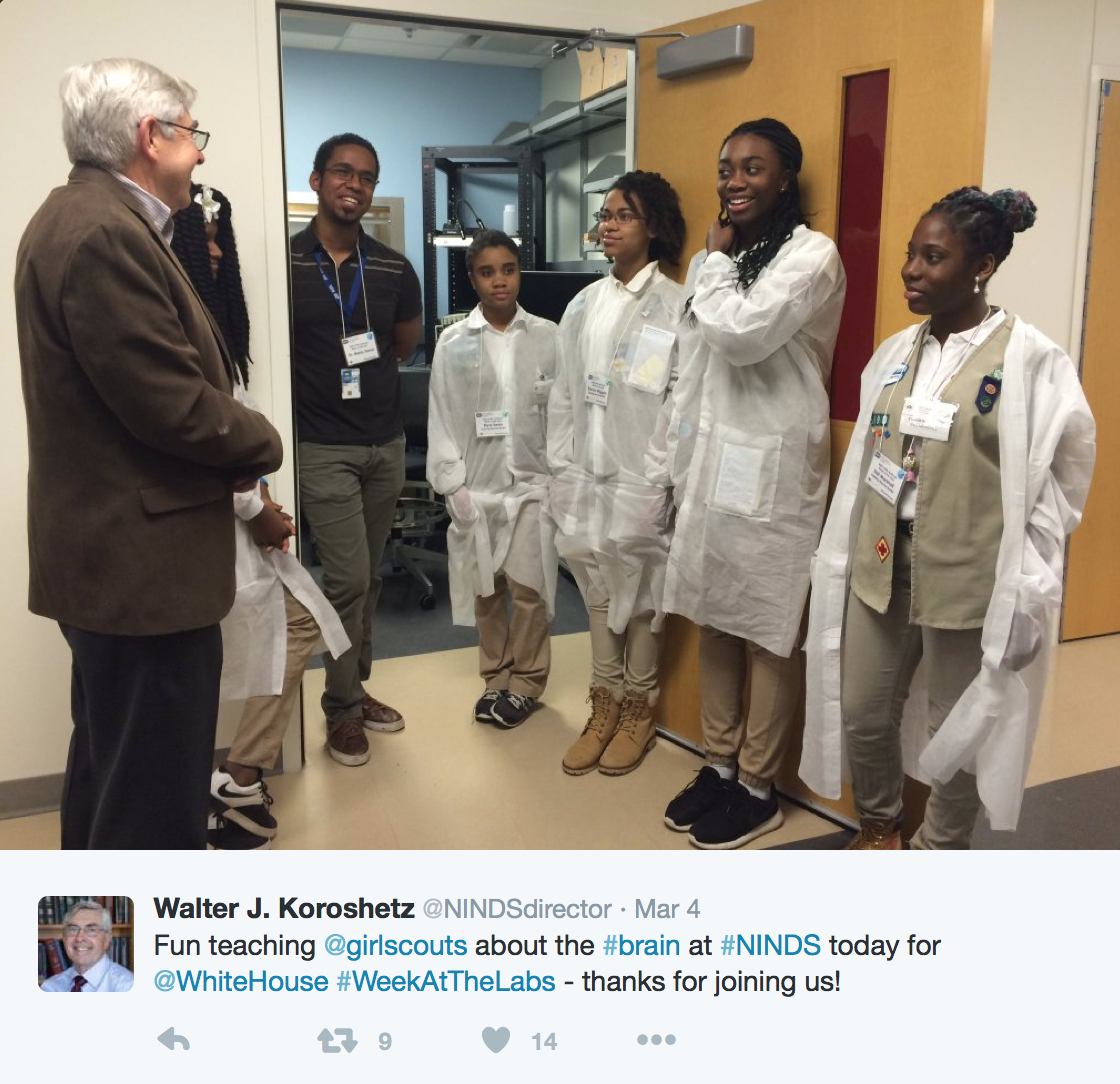 During their visit to Porter, the girls, who range in age from 13 to 15, met with me and several NINDS leaders, scientists, and staff. In the time I got to spend with the students, we chatted about opportunities that scientists have to travel around the world and how to succeed in science. I told them to take courses that interest them and to follow those interests wherever they lead.

To kick off their morning at NIH, they were greeted by Dr. Roland Owens, Assistant Director, NIH Office of Intramural Research. After discussing the importance of a diverse STEM workforce, Dr. Owens gave the girls a bit of advice for exploring careers in science: get to know your science teacher; join the science club; and look at the bios of some of the people you met today to trace the paths they took to get here. He then shared that his path to science was inspired by Jacques Cousteau films, nature walks, and summer courses at the Maryland Academy of Sciences. 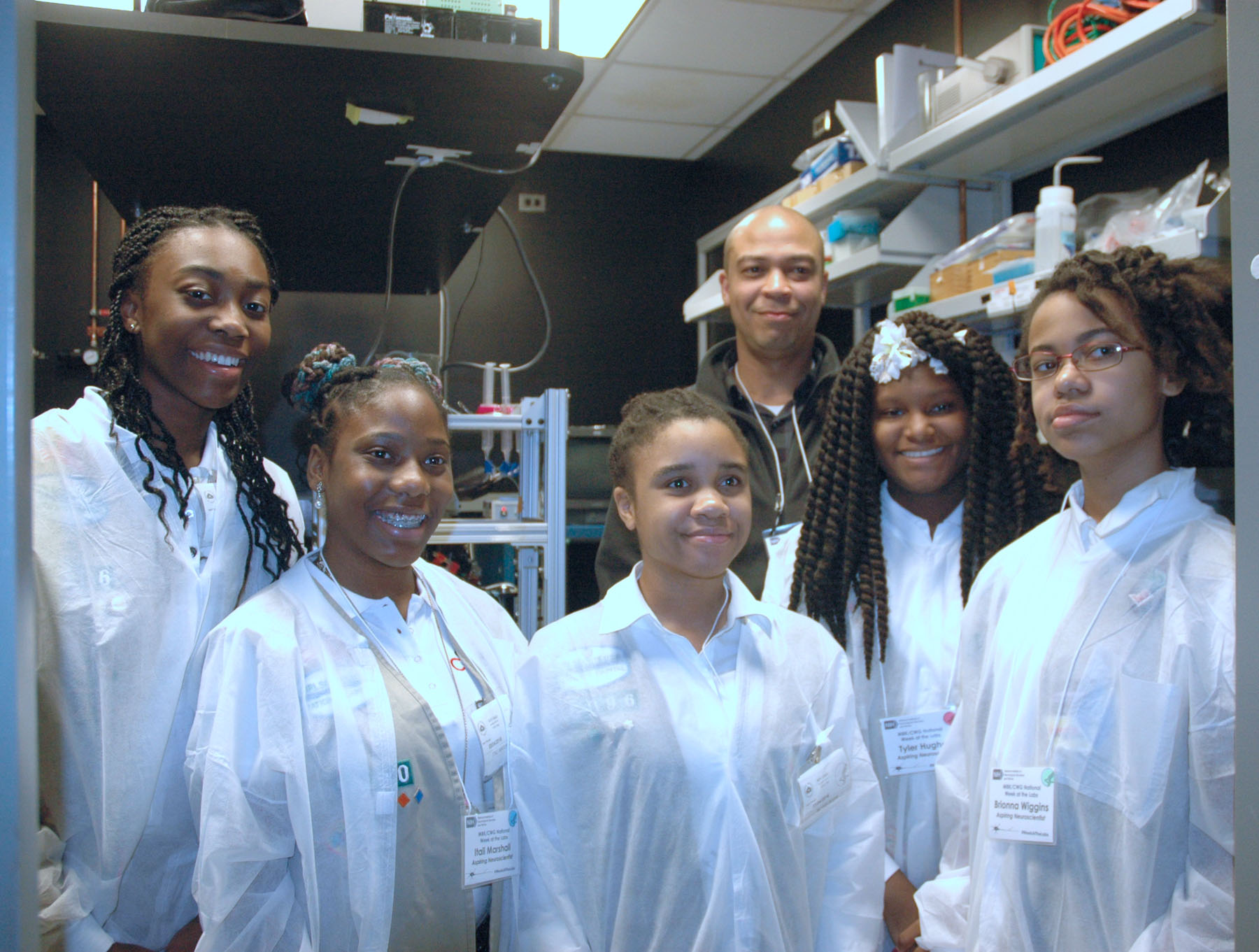 Dr. Zayd Khaliq shows Girl Scouts from the DC and Maryland area around his lab. Khaliq told the students, “If you have a big imagination, this is the place to be.”

Throughout the morning, the students met with a neurosurgeon, Dr. Nduom, the Porter Research Center’s head veterinarian, LaTesa Hughes, DVM, and two research scientists, Dr. Zayd Khaliq and Dr. Mario Penzo. Dr. Nduom showed the girls a video of a tumor resection surgery he had recently performed and discussed the challenges of brain surgery. Dr. Khaliq described his research on the role dopamine plays in movement and reward-based behaviors and showed the girls around his lab, demonstrating how to slice mouse brains and use electrophysiology and optical imaging equipment. LaTesa Hughes talked about many of the dozen of animals housed in Porter and their unique attributes that make them important for specific research studies. Dr. Penzo drew diagrams on his office whiteboard to teach the students about how neurons communicate through synapses and extended an offer to host any of the girls in his lab during the summer if they wanted to learn more about science.

In a final wrap up session, Dr. Jones-London told the students that her path to science began with a series of summer science courses when she was in high school. To get started in a science career, she told the students, “You have to have the skills and the effort, but you also need to know about the opportunities that are available.”

And here at NIH, there are some really amazing opportunities for students of all kinds to get involved in research:

I want to thank the Girl Scout troop members for coming to visit us and for their interest in what we do here at NINDS. I wish them the best in following their hearts toward fulfilling careers in the sciences or elsewhere. Finally, I encourage more young people to explore the opportunities mentioned above to spend time at NIH and learn about rewarding STEM careers.

Help us celebrate Brain Awareness Week (March 14-18)
Middle school students from the Washington, D.C., area will become brain scientists for a day when they visit the National Museum of Health and Medicine in Silver Spring, Maryland, on March 16 and 17, 2016. Scientists from NIH will be at the museum to lead students through hands-on activities that explore the structure and function of the brain, and how alcohol and drugs can affect brain health.
Visit this page for more information: http://www.nih.gov/news-events/news-releases/students-explore-brain-nih-scientists